The first step of a product FMEA is usually the structural analysis.

In a structural analysis, the product is divided into system elements, which are usually hierarchically related. This article is intended to give an overview of the different possibilities for structuring a product FMEA.

The goals of a structural analysis are:

The classic structure of a product FMEA is based on the bill of materials structure - breakdown into assemblies to components (see Figure 1).

This division has advantages:

The separate listing of interfaces in system elements would most likely not be done for the Bobby Car. Here are two useful examples from practice:

Products are becoming increasingly complex. Electronics, software and also mechanical systems such as lubrication or cooling systems can run through the entire product. If work were now purely assembly/assembly/component oriented, this would lead to complicated and duplicate function networks. An organization of the structure according to function groups allows:

As an example, a functional structure is shown in Figure 3.
Practical examples of a function-oriented structure analysis: 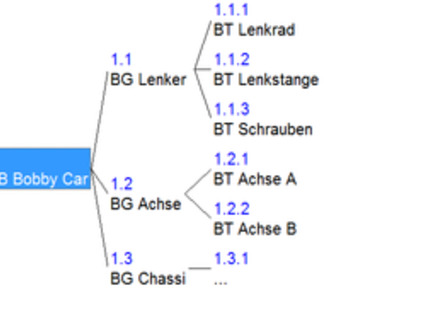 More interesting articles for you